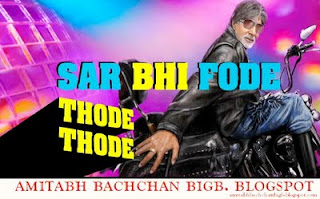 The iconic status that Amitabh Bachchan has achieved over the years ( from 1970's till date) needs to be compensated at one point in time. With Bbuddah Hoga Terra Baap, the successful Telugu director Puri Jagannath celebrates the persona and charisma of Sr Bachchan and his contribution to our Indian Cinema. Bbuddah Hoga Terra Baap bring the 69-year-old Bachchan back to his flamboyant angry man character. The film is a masala flick through and through. Be it the medley of Amitabh's hits or the action sequences, it is all about the iconic brand name Amitabh.

Viju (Amitabh Bachchan) is an ex-gangster, who comes to Mumbai on a mission. He is flamboyant, loud, arrogant and retaliates when people call him 'Bbuddah' (old man). The first impression suggests that Viju is on a mission to assassinate the ACP (Sonu Sood), but there are more agenda hidden behind his intentions, which is revealed with the story. The story takes off from the interval point with and unexpected twist. From here on the film leads to a peak, an action-packed finale and subsequently an emotional reunion.

Bbuddah Hoga Terra Baap bring back the era when a films success and functioning depended entirely on one man, it brings back the one-man-army saying. Here that one man is none other than Amitabh Bachchan. The veteran is electrifying, we salute to his undying spirit and energy. The film is a full packed South Indian film, with a typical narration, the slick edit, the fast pacing, the stylized action scenes and the larger-than-life characters.

The writing is bang on, director Puri Jagannath makes sure that he doesn't disappoint the hardcore Amitabh fans. Besides acting Bachchan show off his larger than life stature with witty dialogue. Puri presents Big B like a true superstar in Bbuddah Hoga Terra Baap. Vishal-Shekhar have done a commendable job by composing the medley of Bachchan hits, which comes at the beginning of the film. Amol Rathod's cinematography is perfect, while Vijay's stunts are stylish.

Though the film is full of masala, the first hour works in portions. While some part involves the viewers mind and brain, there are multiple tracks which get on your nerves, especially the scenes in the coffee shop are most irritating. Even the the track involving Raveena Tandon comes across like an unwanted guest. It doesn't work at all.

Amitabh Bachchan is truly the Baap of Indian cinema and with Bbuddah Hoga Terra Baap he reiterates the fact yet again. The attitude, dialogue delivery that Big B puts into the character of Viju will remain etched in your memory for long. His loud attire may raise eyebrows initially, but later you realise that it goes with the character that he plays in the film. Hema Malini is, as always, graceful. The chemistry between them is refreshing. Raveena Tondon's role is ill-defined which is the reason why she is sidelined. Sonu Sood is first-rate. Sonal Chauhan looks pretty and acts well. Charmee Kaur is likeable and funny.

Finally, Bachchan fans this one is especially for you. And those who are not Bachchan fan also do watch it simply because they don't make them like Amitabh Bachchan anymore. Over all Bbuddah Hoga Terra Baap is a masala entertainer. Just go for it!