There is something so mesmerizing about the Godfather Big B 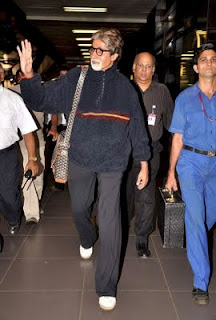 Jalsa , Mumbai  Sept 1, 2011     Thu  11 : 54 PM
There is something so mesmerizing about the ” Godfather ” that even after so many years of its making and release, it still remains fresh and attractive every time you see it. On a rare off day today, I remained that lazy unperturbed bird, curled up on a couch and back to back watched the Godfather Series - perhaps a version which was the directors cut and so a longer version and having scenes that were not seen before.
I remember the first time I saw the film. It was in England long after its release. Those days the film releases from USA did not arrive in India for months. Salim Sahab and Javed Sahab were with me in London for a short break during the shooting of ‘Sholay’ and we were desperate to see the film at the first opportunity. Some time had elapsed since its release and it was not running in any theater in the city. We discovered that a nearby town was screening the film in a small unknown theater and we caught a train to get to the venue to catch the film. It was spell binding ! It is one of those films that remain with you for eternity - Godfather, Gone with the Wind, Kaagaz ke Phool, Limelight - just their mention brings so many moments back to us.
The selection of the players in each Part of Godfather, the locations and the performances simply flawless. And even today decades later there is still so much to learn from them. One imagines that with the passage of time, craft and technique would age and become stale or irrelevant. But no, not a single frame or performance or moment in the film seems like it can be replaced with anything better. No never. And that really is the truth about classics.
And the funny part is that after viewing an impressionable film or series, you begin to get so involved in them that you actually start behaving attitudinally like the characters in the film .. Ha ha ..
So right now I may be typing out a quick message for the Post on the blog, anxious about getting to bed soon for the KBC shoot tomorrow, but you live with Vito Corleone and Michael and Brando and deNiro and Pacino - your walk your attitude and your speech suddenly acquire the likes of the greats above, much to the consternation and surprise of the staff, who wonder whether it was better that ‘Saab’ had gone to work than have stayed back in the house !!!
I must retire. I know that I have been inconsequential in my content these past few days, but my timings have gone somewhat out of control and as soon as I can gather them up, I shall be more concentrated and collected and perhaps more expansive ..
Till then .. my love with you and my thoughts …
Amitabh Bachchan
Posted by Mahendra at 1:52 AM