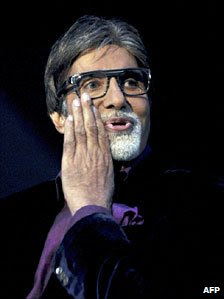 Amitabh Bachchan recovering after surgery
Bollywood legend Amitabh Bachchan is recovering from successful abdominal surgery over the weekend, doctors say.
The 69-year-old actor, who has a history of abdominal ailments, was operated on in a hospital in the western city of Mumbai on Saturday.
Bachchan, who continues to act in films, was last admitted to a hospital in Mumbai with abdominal pains in 2008.
He also underwent surgery for an intestinal condition at the same hospital in 2005.
Bachchan suffered a near fatal injury during the shooting of an action scene on the set of a film in 1982 and was critically ill for several months.
Saturday's surgery lasted for "about two to three hours and everything is normal," tweeted the star's son, Abhishek Bachchan, himself a Bollywood actor.
Bachchan is likely to be released early this week if everything is fine, his son said.
Bachchan has acted in more than 180 Indian films over 40 years. He remains India's most popular actor.
Last year he returned as the celebrity host of Kaun Banega Crorepati, the Indian version of Who Wants to Be A Millionaire and one of the most watched shows on Indian television.
He also made his Hollywood debut in a new film adaptation of The Great Gatsby, starring Leonardo DiCaprio.
News bbc.co.uk
Posted by Mahendra at 9:20 PM