Big B To Be Discharged On Tuesday 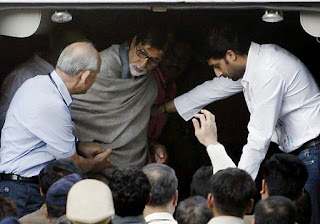 Big B To Be Discharged On Tuesday
Mumbai, Feb 13: Megastar Amitabh Bachchan, who underwent an abdominal surgery at a city hospital, will be discharged tomorrow.“He is recovering and will be discharged from the hospital after 11 am tomorrow,” hospital sources told PTI. The veteran actor had undergone the abdominal surgery on February 11 at the Seven Hills Hospital at suburban Andheri. Bachchan had on his blog on February 9 revealed that he would undergo the surgery.The actor has a history of stomach ailments dating back to 1982 when he was shooting for an action scene for the film ‘Coolie’ when he had suffered a near fatal intestinal injury and remained in hospital for many months.
Posted by Mahendra at 9:26 AM