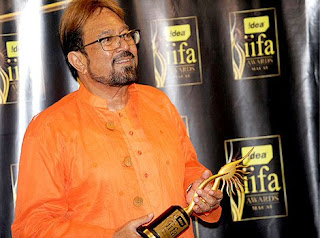 Khanna, who featured in hits like "Aradhana", "Kati Patang" and "Amar Prem" in his four-decade long career, kept referring to Big B as "babumoshai", in the manner in which he addressed Bachchan in their 1971 heartwarming hit "Anand".

It took me 40 years and 180 films to get this IIFA Life time Achievement award-along journey I must say.I am very grateful to IIFA,(event organisers) Wizcraft, committee members and babumoshai.Babumoshai, thank you very very much, "Khanna said in his acceptance speech.
It is after 16 years later that we are together on a stage.I thank him from the bottom of myheart, "he added.

Khanna, 66,also belted dialogues from his famous films to entertain the audience.And he even appreciated Bachchan's successful journey in his professional life.


Life should be big, not necessarily long, and my babumoshai is living lifebig-living life kingsize.(Look) from where to where he has reached in so many years.We started with? Anand'and today we are on this platform.He is very dear to me, he is my babumoshai, "hesaid.


Khanna received a standing ovation from industry members as well as the audience.
Whatever I am, I am because of you, my audience.My audience members, Hindu, Muslim, Sikh or Christian-every one was responsible to make me an actor to a star to a superstar to what I am today.Thank you all, "hesaid.


In the past, IIFA has awarded Bollywood stalwarts like Waheeda Reham, Asha Parekh, Yash Chopra, Dharmendra, Mumtaz and others for their contribution to Indian cinema.