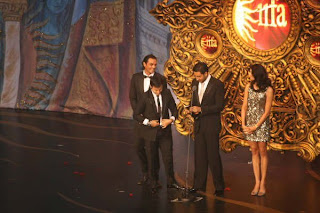 "It has always been my desire that the talent that we have in our country and the place that Indian cinema enjoys in our society should expand beyond our shores. Thanks to IIFA and some of the association that we have, it has enabled us to build the bridge culturally and economically," Amitabh told reporters before he voted for IIFA Awards 2010 at J.W. Marriot here Friday.

"As you all know the voting for IIFA awards in an individual process. There is no jury. It's the people from film fraternity that votes. It's a very welcome change from all the other awards ceremonies that are constructed in our country. PricewaterhouseCoopers is the holder of the legacy of its results," he added.

His "Paa" has been getting many of the major awards this year and his performance has garnered huge accolades.

When asked to pick his favourite film, the megastar said: "I liked '3 Idiots'. I liked the film. Youth population in India is indeed one of the largest populations. What youth want should be taken seriously. '3 Idiots' was a film that addressed many of those problems. Apart from that I liked some of the work that Ranbir (Kapoor) did. 'Kaminey' was a fantastic film.

"Shah Rukh (Khan)'s 'My Name is Khan' yet another exemplary film. I am yet to see the film as I was touring abroad. I have seen the promos. I loved the way Shah Rukh has portrayed the disability... it was away from what he has done in the past."

This is the eleventh year of IIFA celebrations. Bollywoods three Khans - Aamir, Shah Rukh and Salman - have not been seen at IIFA events the last two years.

"Some were not available. Some were busy with their early commitments. In my last 10 years of experience, every one, be it Shah Rukh or Salman has come to the award function. May be some year they have missed, but that must be because of their shooting schedules," said Amitabh.