Amitabh and Jaya Bachchan paired together after a decade

Amitabh and Jaya Bachchan paired together after a decade
By: Shaheen Parkar Date:  2011-03-23 Place: Mumbai 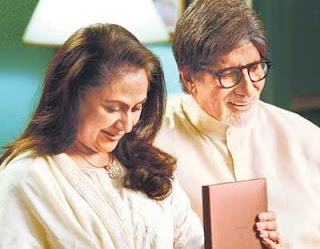 While Jaya was styled by her fave designer duo Abu Jani and Sandeep Khosla for the shoot, AB Sr stepped out in an international fashion label. The ad is directed by Prakash Varma.


The couple's last screen appearance was in Kabhi Khushi Kabhie Gham in 2001.

They have done a social service campaign together but this is different. It will be the first time that both are endorsing a product.

What was most interesting for the Bachchans, was the string of coincidences awaiting them.

Explains the Big B, "The shoot happened at the same studio (Filmistan) where K3G was shot. On the same floor! The director of photography was Kiran Deohans who also shot K3G!"


FAMILY ADS
Amitabh and son Abhishek Bachchan featured in an automobile ad. Meanwhile, Aishwarya Rai and Abhishek are seen together in a bath soap commercial.


News MidDay
Posted by Mahendra at 2:58 AM