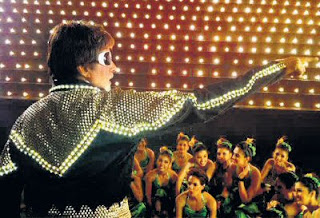 For a special medley in his forthcoming film 'Bbuddah Hoga Terra Baap'
Amitabh Bachchan was seen glowing (literally!) at the shoot of his forthcoming flick Bbuddah Hoga Terra Baap at Filmistan Studios, on Thursday. As part of a special medley composed for him, the Big B shot the famous Sara Zamana Haseeno Ka Deewana track in the exact same way he did in 1981. In sunglasses and an electric lightbulb suit!


Shaad Ali, the director of Bunty Aur Babli in which Bachchan starred too, called the shots for the shoot and Shiamak Davar did the choreography. Says a source, "Amitabh Bachchan and the background dancers (24 girls) wore similar costumes as in the original song. The sets were also identical to the original. Art director, Amrita Singh, had been given the brief to create a replica."

Adds the source, "It was nostalgia time for Bachchan. He was shooting for the same track he shot for 30 years ago. He still clearly remembered every move. The shoot wrapped up late last night." The song is part of a medley of Big B's yesteryear tracks like Khaike Paan Banaras Wala, Rang Barse and Pag Ghungroo, which have been specially redone for the movie.

The original track
It was Amitabh Bachchan's suggestion to use light bulbs on the jacket, for the song Saara Zamana Haseeno Ka Deewana from Yaraana in 1981. He got this idea after watching a bull fight sequence from an English film starring Robert Redford. He told director Rakesh Kumar, who instantly agreed. The switches for the lights on the outfit were in Bachchan's hands. He synchronised the flashing of lights, while dancing to the rhythm of the music.
News MID DAY
Posted by Mahendra at 1:58 AM