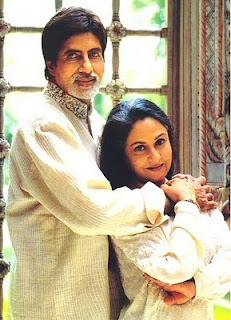 Jalsa , Mumbai     June 2/3, 2011    Thu/Fri  12 : 08 AM
Its past midnight right now .. its the 3rd of June .. and its our Anniversary .. 38 years since 1973 … !! Still remember the speed with which everything happened on that day. It was a quick decision. Marriages generally are. And before long I was heading across to a common friend’s place with my family for a simple Bengali wedding ceremony. Not many people at all. Just family and a couple of personal friends. There was a gentle quiver in the skies and a few drops of rain fell just before setting off. Some of the neighbors exclaimed that it was a good omen - the Gods send their greetings they said - and we were off ! And before long off on a plane to London, for the very first time. In fact for me and for Jaya too, the very first time out of the country - minus my short visit to Nepal in the mid 50’s.
It is a wonder, that many now feel stupid about, but landing in London and driving through it was like walking through a picture post card - one that had remained with us ever since we became conscious of the world. The people, the roads, traffic, monuments, important destinations all seemed so awe inspiring and belonging to some fantasy. A fantasy that I am certain all of us have visualized at some point or the other.
I remember being invited by Rajesh Khanna and his wife Dimple, also recently married to the Hotel they were staying in for dinner and a celebration, and some of us, so taken up by the city, going out to the balcony of his suite and playing L O N D O N … LONDON !! A very innovative little game that we had all played when we were kids ! When you think back on it now it all seems so silly .. but there are many aspects of ones life which do indeed look silly when you look back upon them ….
I notice and read many comments that show anxiety on the promotion of the film. Whereas I admire the concern and am sympathetic to your fears, there is a promotional activity that progresses well. Large banners, looking ominous are up all over the city. Full page ads., adorned the Times Group and the Hindi prominent group papers all over the country a couple of days ago .. and the systematic press is going on. Remember one thing. Most of the comments coming are from overseas markets. You must know that Viacom 18, is  Paramount Pictures tie up Company. They will treat and release this film in the US and UK markets according to their understanding and exhibition sense. As it is the number of prints for the film have been substantially increased abroad because of the strengths of Paramount. Then … some expressed fears of the ‘Transformers’ ! The film is also a Viacom 18 film. They will not kill their own product. But for one that has simply no knowledge of how and why these systems work, it is best left to the guile and accumen of those that know their job. Sometimes it is best to keep things level and allow the merits of the film to carry it forward. If it has the merit, it shall be patronized even without any marketing. If it does not have it, no amount of publicity and marketing will pull it through. And recently there have been umpteen examples of some rather prominent projects failing despite all the hoopla and hype ! By the grace of the Almighty, the initial reactions to the opener and the trailer have been extremely well received. The one factor that has come through has been a common reaction : ‘I want to see this film right now !”. I think it has been a good omen and feel. We need to respect that and build on it gradually. But as I said, in the end its the merit of the film that eventually counts, and there has never been a prediction in the world ever that has been able to predict the box office.
So … I bid you all good night !! The smell of the ‘mogra’ that has been so sweetly placed on the bedside by Jaya, is overpowering ! I will need to rest early for an early day tomorrow !
My love as ever …

Amitabh Bachchan
Posted by Mahendra at 1:19 AM