As Hurricane Irene hits the East Coast of the USA, we all pray that those that inhabit these areas remain safe and secure 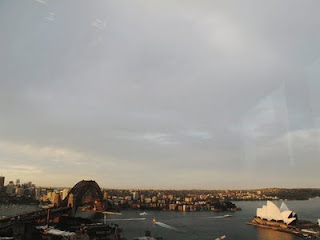 Sydney , Australia       Aug 28 ,  2011           Sun  9 : 00 PM
As Hurricane Irene hits the East Coast of the USA, we all pray that those that inhabit these areas remain safe and secure … take precaution and do take care ..
Its been a lazy Sunday. But productive. There has been a concerted effort to get rid of the jet lag and perhaps tomorrow morning should be an indicator of where one stands as far as that is concerned. Getting the body clock to adjust to these rapid time line changes and then functioning normally is a nightmare. The fear is always of dozing off at crucial moments when all attention needs to be required. Part of the kind of world we live in today …
Apart from making desperate attempts to bring the time line of my body in tune with that of this new destination, I did spend sometime in reading about the city and the country I now am in. And I am amazed at the significance and the importance of Sydney not just as a progressive city, but its importance as the first recipient of the settlers that came in from England in 1788. For those that were discarded, as history goes, from civil society in Europe to be banished in a sense, from all kinds of social livelihood to have emerged in the world scenario as one of the most important and valued nations of the world is quite a remarkable story. And it all began here, just outside my window where I find myself in, at the harbor below.
Meanwhile back in my own land and country, history is being made too, by the evolution of people power, in an attempt to bring the wrongdoers to book. To eradicate the evils of corruption and to bring accountability and honesty in public life. And … in a non violent protest, by one single human !
The strength of solo effort mind and application has the power to move many a mountain … and no where could this be truer than what one individual belief did. The initial step to correction has been taken, the battle has been won but the war remains. True victory shall only be registered when we shall win the war. The step taken has been lauded and noticed and given due respect. It now becomes the duty of every individual to persist and persevere in maintaining all that has been achieved and to add to it rather than allow it to fall and fail.
The responsibility is greater now. Success is easy, maintaining it is the difficult part. Constancy of regulation and adherence to the rule and law, committed discipline and a functioning of some uniformity, is called for at times like this. That really is the challenge. In a country that drives itself with so much diversity within and without and still progresses well, is the biggest credit to India. As the largest functional democracy in the world it has set many examples of its integrity as far as that is concerned. No other country with such a large diverse culture has managed the way India has and that to me as an Indian makes me most proud.
Good night dearest ones …
Amitabh Bachchan
Posted by Mahendra at 1:07 AM