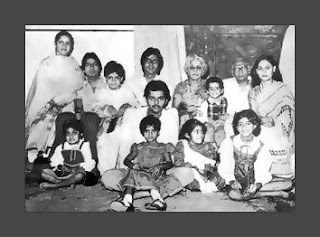 So finally we have a name for the newest entrant in the Bachchan family - 'Beti B'.


Yes after Big B, Jr B we now have a 'Beti B' and the name has been anointed by none other than the father himself.

Abhishek Bachchan can hardly contain the happiness of donning the new role of that of a father and he readily accepted this name suggested to him by a friend on twitter.

"And till we find a name for the little lady a dear friend @ShahanaGoswami gave me a great one."

He is also going all out interacting with fans and asking for name suggestions, he tweeted: "And suggestions for names are very welcome guys. Something with "A".

Relative, friends and fans have been suggesting many likely names for the new baby.

Voracious social networker and Aishwarya Rai's father-in-law, Amitabh Bachchan acknowledged all suggestions for names for the infant sent in by fans, saying "some of them really good ... will run it by the parents .. !!"

Amitabh Bachchan also refers her as 'little one' in all his blog and tweets.

The news of Aishwarya's baby has generated more interest than any other in the past few days. Morphed photographs of the mother and baby were doing the rounds.

But Amitabh Bachchan has put all that to rest and said that the pictures were all fake.

The family is now preparing and eagerly waiting for the mother and daughter to come home.


Amitabh wrote "T 565 - Difficult to tear yourself away from the 'little one' , but now home to replay videos and stills and wait for her to come home ..!"

Amitabh Bachchan also revealed more details of the birth of his granddaughter on twitter and his official blog.

He clarified contrary to what was reported by media that Ash did not go for C-section. Aishwarya opted to have a normal delivery, without epidural or painkillers.

This news was widely circulated and also offended many. Big B was advised not to let out such details about the birth of his granddaughter.

This did not go well with the actor and fired back in his blog.

"They warn me of dire consequences by mentioning details of the delivery or about Aishwarya. Why ? Do they have a monopoly on my family ? Are they the only ones that have an access to my personal matters ? So If they write and mention and talk about it, its fine ! Not the other way round ? Not acceptable. particularly when they are misreporting incorrect details !!"

While Abhishek is enjoying his fatherhood, Amitabh Bachchan is already looking forward to start the process of being a grandfather.
News emirates247