Launch the polio campaign for UNICEF Big B 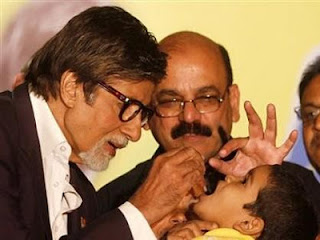 Jalsa , Mumbai          Dec 15/16 ,  2011       Thu/Fri  2 : 41 AM
Ok … so its late .. 2 : 41 in the morning … so what ?? Any time is good time for the Blog and the Ef. Pushed to the wall with work. Had to submit an article for the Outlook magazine and since tomorrow morning was the deadline – they always have deadlines – I needed to write it tonight. The things one has to do for media !!
So I dressed up in my smartest suit I could pick up in the early hours of the morning after the gyming and went across to the Novotel Hotel, by the sea, a stones throw away from Jalsa, to launch the polio campaign for UNICEF. A most fulfilling morning it was, because each speaker from the Government to the officials at WHO and Unicef were all praise for my efforts at bringing polio to a most respectable level in the country through our campaigns. This year we have not had any reported cases of polio and there has been only one case in West Bengal. The generally vulnerable states have been UP and Bihar and there were none from there, which is some achievement. There is an expectation that by the February of next year India shall be completely free from Polio. Yeaaaaaahhhh !!
At last something that I did worked out fine !!
CNN-IBN has nominated me for the Indian of the Year in the Entertainment segment and I shall be travelling there tomorrow for it. Who knows, I may win !! Sorry about that … am in a sleep deprived, over worked syndrome mood and it generally ends up by being funny or attempting to be funny. My attempts so far have not even been considered to be such ..
Hey its actually getting a bit chilly in here .. I mean Mumbai … feel it in the air !! Hmmm .. wonder what Delhi would be like then … freezing !! Love Delhi in winter .. the air the atmosphere the flowers the smell of potent coffee in the lobby of Hotels and restaurants … warm clothes, scarves and woolies … and then one wonders in dismay .. what of those that live off the streets and shiver in front of homemade fires on the street from the trash !! Sad state ! … No more then of this .. one must slumber well or else ..
But not before you get to see some of me in the morning of today .

Good night and may god bless all of you ..
Amitabh Bachchan
Posted by Mahendra at 2:53 AM