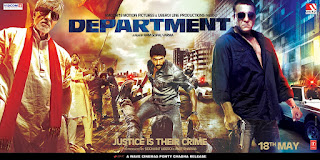 Jalsa , Mumbai                                       Apr 4,  2012                                 Wed  11: 45 PM
RGV smsed me to put up the poster or the first look of ‘Department’ on my Twitter and Blog so there ..
I do feel awkward to promote my own work, for in the past there has been great resentment towards it, but … there it is, merely as an announcement and information rather than having direct coinage much like some of the prominent journalists do, to draw your attention to either a programme of theirs or an article that may have been written by them. Many a time they have requested me to mention this on my site as well, as have some other artists that have contributions to the medium. I would imagine that this has something to do with the number of followers that I now possess – close to 24 lakh, or in simple US and international unit standards, 2.4 million.
Ha ! ‘Millions’ people understand with greater urgency somehow, than they would ‘lakhs’. A ‘millionaire’ would garner greater attention in the region than say a ‘lakhpati’. Its the power of economy and finance. The dollar, yen or Euro would be better understood than say a Rupee. But may I stick my neck out and say that it shall not be too long before the tables would change in our favor. This is not a patriotic analysis or compulsion, it has its roots in the emerging scenario of the world, and for that I as an Indian feel most proud.
The grand daughter has a fancy for the singer Katy Perry. I hope I have the name correct. Yes just checked, it is right. She had performed along with several others at the opening of the IPL last night, and now Navya wants her autograph for she loves her. So efforts are on to make that happen !! I would probably get killed for this, but I had not heard of her till last night. The age difference is playing havoc ! In Hospital a friend gave me an entire collection of songs, some unprinted too, of the Beatles. Bet todays grandchildren would ‘snuff’ at that, but for us it was like possessing a Bible – sacred and pure and so full of all the worth in the world !! Those were the days my friend, when communication was zero, possessing a track was unheard of, getting an LP of their latest was like being the most important person in the Universe. It never was sold in the country, the lucky few that travelled abroad would come in with it. It almost always came in several months or even a year into the country. They had by then moved on to the next, while we still lived and enjoyed the present. Sitting at privileged friend’s places just to be able to listen in. Or visit the irresistible restaurants and clubs on Park Street in Kolkata, to hear the bands play their songs, and a few enterprising couples attempting to do the ‘shake’ on the dance floor ! What times … now, mere vacant memories. Some day I must write about those wonder days – of radio programmes ‘A date with you’ by Pamela I think from AIR, late in the night, of Elvis, Chuck Berry and ‘Lets twist again ..’, Pat Boone’s swooning vocals, Cliff Richards, who we now often see at Wimbledon in the stands, Sinatra, Dean Martin, Nat King Cole and jazz albums of Zoot Sims … ahhh ..!! the list just goes on ..
The evening was spent at PVR theaters with Vidhu Vinod Chopra, who does a retrospective of his films and show cases ‘Eklavya’ … we sit with the audience after the film screening and debate and discuss the film and open it up to the audience to ask questions. Such a delight to be talking cinema without the words ‘kitna deti hai’ or how long it ran for how many weeks, or what its business was, whether it profiled itself in the 100 cr club or not … such a joy to be talking of what the director went through, of what the artists thought of before the shot or the writer and editor and set designer and music director thought of doing what they did with the film .. this concept needs encouragement, not just for students of cinema, but for the cinema going audiences as well … so educative and so necessary … !!
Alright it comes upon 1 am in the morning and Chelsea plays home to Benefica … must get back to the Tv … so good night .. Mumbai Indians beat last years champions Chennai Super Kings in the first IPL cricket .. so there is a smile, which we hope shall transfer itself into a laughter after the Chelsea win in a short time …
Love
Amitabh Bachchan
Posted by Mahendra at 3:12 AM