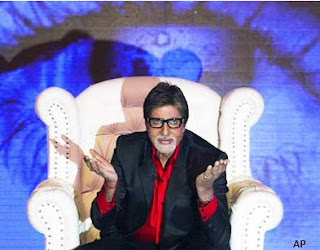 Amitabh Bachchan, the Shehanshah of bollywood who hosts the season three of ‘Bigg Boss’ on Colors channel as Pop Philosopher, has already put the show on top of the table with 11 million viewer tuning in on the first day itself.

The iconic presence of Amitabh Bachchan has also ensured the highest TVR of 3 for the show, which is far more than it was for season 2 hosted by sizzling hot sexy siren of bollywood Shilpa Shetty. In fact, Shilpa could attract only the TVR of 1.5, which is only half of what the Bachchan hosted show achieved on its first day.


Not only this, even the much- hyped Akshay Kumar’s ‘Fear Factor’ could not manage such a huge viewer ship on its inaugural day, despite of being one of the hottest bollywood stars of the present generation. Even the presence of hot beauties like Claudia Ciesla, Shamita Shetty, Sherlyn Chopra etc would have helped season 3.

The buzz doing the rounds in the industry is that it was mere presence of Amitabh Bachchan on the show that changed the dimension and reach of the show. His comforting presence on the inaugural show was enough, not only for the contestants, but also the viewers to get hooked to the channel. Big B’s reference to his great poet father Dr Harivansh Rai Bachchan further enlightened the atmosphere on the show.

Every participants—from gorgeous Poonam Dhillon to Shamita Shetty, Sherlyn Chopra, Jaya Sawant(Rakhi Sawant’s mother)and Raju Shrivastav—was overwhelmed by the presence of living legend of bollywood and related her or his experience of interaction with Big B before the audience.

Insiders say that Big B is once again going to repeat history by making Colors the top channel, leaving competitors like Star Plus, Zee, NDTV Imagine and Sony far behind in the rat race, with his presence on the television with ‘Bigg Boss 3’.

It may be recalled that Amitabh Bachchan’s presence on Star Plus with ‘Kaun Banega Crorepati’ in year 2000 had not only made that channel top of the lot, but also changed the scale and economy of television in India forever. This second appearance on Colors is also going to do the same in coming months.

The grapevine has it that earlier Salman Khan’s show ‘Dus Ka Dum’ had given Sony channel some hope of getting close to Colors channel, and giving a tough fight in the near future. But coming of Big B with ‘Bigg Boss 3’ has dashed all hopes of Sony and Star Plus for a revival, and they will have to remain content with their subordinate position to Colors channel for the time being.