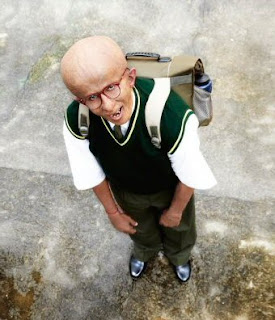 The movie, about a child suffering from progeria - a rare disease of premature ageing among children, has been produced under Amitabh's production banner AB Corp.

Discussing the film's budget, the 67-year-old posted on his blog bigb.bigadda.com: "I think we set out to make this film with certain definite plans. It would not be a penny over the Rs.15 crore (Rs.150 million) budget we had decided upon; indeed it is nominally better than that - it's Rs.14.75 crore (Rs.147.5 million)."

Amitabh plays Auro, a progeria-afflicted child in the movie, while his real life son Abhishek essays the role of his father. International make-up artists had been roped in to take care of Amitabh's look for the film.

The actor wonders whether producers who project a "modest amount" of Rs.50 crore-60 crore for their films, realise that "films of such high budget dimension need to do twice (more business) and more in returns at gross box office in order to get a net benefit to bring home".

"A Rs.60 crore film would be required to do a gross twice the amount if not more. Print and publicity add on extra money and by the end of the day the film must perforce do close to Rs.150 crore in order to break even and make money. Does the market have the capacity for such returns," he asks.

However, the actor, whose production company incurred losses after making films like "Tere Mere Sapne" and "Mrityudaata", says money matters are "mundane" and "irritating".