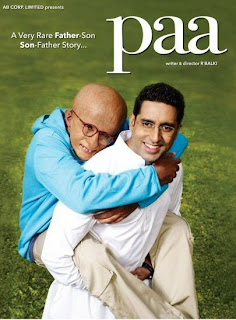 
New Delhi, Nov 4 (IANS) Megastar Amitabh Bachchan, who plays a 12-year-old progeria patient in "Paa", says he had to stick on several pieces of specially crafted clay to get the right look for the movie.

The actor couldn't wait to upload the first poster of the film on his blog bigb.bigadda.com Wednesday, and wrote at length about what went behind his look of a child suffering from progeria, a rare disease that causes premature ageing among children.

"The face that you see is the result of deep research. Kids affected by this problem lose all their hair, become bald and their veins begin to show prominently on their heads, which enlarge to a size beyond normal. Their teeth and eyes suffer also...," posted Amitabh.

To get the special look for the character, director R. Balki roped in international make-up artist Stephan Dupuis, who did Robin Williams' make-up in "Mrs. Doubtfire".

"The prosthetic process is arduous...Around eight pieces specially designed through laborious clay models are most meticulously stuck on to the face. Once the make-up starts, it is impossible to move even a few centimetres. Eating and drinking has to be avoided and you cannot talk because it displaces the pieces over the contours of the face. Separate pieces form the entire look," the actor posted.

The 67-year-old went on to add how the head and ears were one unit and came on as a helmet with the ears being add ons. He says his hearing used to be impaired when the make-up was applied as silicone covered his own ears.

"Two small holes are bored into the skull so some sound can go through. Also when you speak it reverberates inside the skull and you constantly feel you are inside a tunnel with pronounced echo," he said.

"Eye lids come on close to the eyes, the forehead is another piece, the nose, the two cheeks, the upper and lower lip, the chin and finally the neck all get stuck on and then blended through an intricate electronic spray which merges all the pieces to look like one cohesive mass," added Amitabh.

The actor says that since they wanted the look to be authentic, he also had to shave off all hair on his hands, arms, chest and legs regularly so they could highlight the veins by colouring them.

"Paa" is being produced under Amitabh's banner AB Corp and also stars his son Abhishek. In a role reversal of sorts, Abhishek plays Amitabh's father in the film.