Paa is an emotional film Director 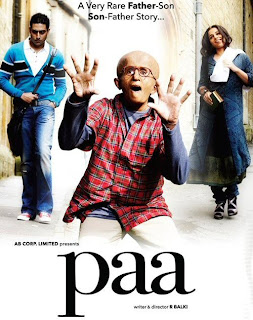 Paa' is an emotional film: Director


Mumbai, Nov 5 (IANS) The film "Paa", in which Amitabh Bachchan plays a patient of a rare disorder called progeria is not an educational movie, but in fact an "emotional story about a father and son", says director R. Balki.

While promoting the film along with its stars Abhishek Bachchan and Vidya Balan at an Andheri cinema hall here Wednesday evening, Balki said: "This is a family drama where incidentally Amitabh Bachchan, who is suffering from progeria, plays the role of Abhishek's son. This movie is not about educating people on progeria."

"It is an emotional story about a father and son."

Progeria is an extremely rare condition of early ageing. Those born with progeria typically live about 13 years, although many have been known to live into their late teens and early twenties.

Asked about the film Abhishek -- Amitabh's son in real life -- joked: "Amitabh was a very troublesome child all through the film."

Asked how she felt playing Amitabh's mother in the film, Vidya said: "I was very apprehensive."

Balki revealed that he wanted a very unconventional look for Amitabh in the movie.

"I wanted to remove every bit of Amitabh Bachchan we know and wanted to build an absolutely new character," he said.

Talking about the make up Amitabh had to put on during the film Abhishek said: "It used to take four hours to put on the make-up and two hours to remove it."

Balki revealed that the script was written keeping Amitabh in mind.

"It's not that I wrote a script and then thought of casting Amitabh, rather I wrote it keeping him in mind," said Balki.

He said that Amitabh not only looks like a 13-year-old boy in the film but also changed his voice and mannerism to fit the role.

Abhishek has been in the film industry for a long time but "this is the first time I am working for my father's production house", he revealed.