I am now getting roles that suit me Amitabh Bachchan 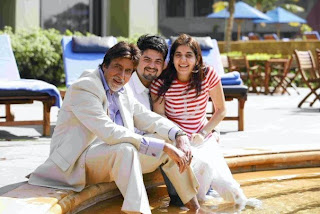 I am now getting roles that suit me: Amitabh Bachchan

Bangalore, Jan 23 (IANS) Legendary actor Amitabh Bachchan Saturday said that he prefers to act in films that not only excite him but also suit him.


"Ram Gopal Varma (director of 'Rann') creates characters that excite me and 'Rann' is a film that I have really enjoyed working in," said Amitabh, while participating in a promotional press meet for his much-awaited film "Rann" at the Taj Residency Hotel here.

Seated along with Varma and Kannada film actor Sudeep, who plays his son in the movie, Amitabh said that he is happy that he is getting roles that suit him.

Complimenting Sudeep on his role, Amitabh said that the Kannada actor has done a very good job in the film.

"Sudeep is very talented and an intense actor. He has a bright future," he added.

Talking about his role in the film, Amitabh said that he plays a media baron, Vijay Harshavardhan, in the film.

"Rann is Varma's story idea. I am only an actor playing a character in the film. Vijay Harshavardhan is an honest person who is committed to certain values. His voice is truthful. I have tried to work in the confines of the script written by Varma,' he said.

"I think the media represents the conscience of the Nation. And Varma has a right to look and analyse the work of the media in his platform," Amitabh said in reply to a question.

"Media is doing its job as much as we are doing our job. We get married and media covers it," Amitabh said, adding that celebrities in the public domain should not feel unhappy because they are covered by the media.

Varma conceded that the film is closely inspired by the life of people working in media.

"I have not done a film focusing on any particular channel. I have made a film based on my own perception of the media. The characters may look realistic to some people, but some others may feel it to be a fantasy or fictional. I will leave it to the people to understand it the way they like it," he added.

Commenting on his role, Sudeep said: "I have played a character in the film which forms an important component of the story. I don't think I have played a negative role. It is a powerful character. I really loved the character."