Jaya and I will work together in films again: Amitabh Bachchan 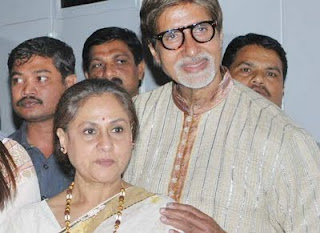 Jaya and I will work together in films again: Amitabh

Mumbai: Megastar Amitabh Bachchan, who has been seen with Jaya Bachchan after a long time in Tanishq`s new ad, says he wishes to work with his actress wife in films.

"After `Kabhi Khushi Kabhi Gham` we faced the camera together for the first time (for the ad). We have done lots of films together and we were thinking that it`s enough and we should stop doing films together.

"But when we started working together in this advertisement, we together realized that we should do more films together. It looks like in coming time we would work together in some films too," Bachchan told reporters at the launch of a Tanishq`s store here Friday.

In their prime, the couple featured in hits like "Zanzeer", "Abhiman", "Sholay", "Chupke Chupke" and "Silsila".

Big B also mentioned that getting a chance to work with Jaya was also a primary reason to get associated with the brand.

"When the concept of Tanishq was brought to me, I was excited for the fact that it`s a Tata company, which is know for its excellence, its maturity, its dignity, its resilience to so many years and in so many aspects of their businesses but really what was most exciting for me was that my wife is going to be part of it," he said.
Posted by Mahendra at 5:15 AM