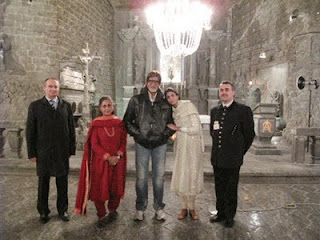 thanks all the extended family members for their warm greetings to Abhishek and Aishwarya for their anniversary of marriage
Jalsa, Mumbai      April 20/21,  2011     Wed/ Thu  1 : 19 AM
….. and so one thanks all the extended family members for their warm greetings to Abhishek and Aishwarya for their anniversary of marriage. Its been 4 years !!
….. and so also does one thank those that show expectation from my work and films which as they lament has not appeared on the horizon for an endlessly long time !!
‘Bbuddah’ moves rapidly, inconsequentially, without any fuss or strain, without delay and unpunctuality and within the budget assigned to it. A most nominal figure compared to what figures one comes across from all the ‘biggies’ !
It is restraining to mention any other detail, for fear of it being picked up and speculated, televisioned, broad sheeted and headlined in to yet another millionth breaking news ! Restrain and refrain are the two most devoted and well advised actions in the times today of every move and breath being captured for posterity and who knows for eternity as well. How words shall be picked and juggled around to make them sound the exact opposite of what they were meant to be is an admirable art. And how soon the creatives take place is one of the miracles of Tv. A master class in management and intelligent minds !
On the twitter and often on the blog at times, one gets criticized for promoting self or family members. Perhaps we do. The media themselves often do not shy away from doing it. I have all the senior editors of all things prominent in society, on my followers account on my page and they keep reminding us without a break, how important and interesting it is to see the 9 o clock news, or a debate on Face the Nation and so on … they use this medium well ..
It is indeed quite fascinating to be able to achieve that moment - a moment when the answer to a question is looked upon as being more questionable than the question itself ! Happens at times. But since the fourth estate is without fault and so heavily protected, it is in the best of interests to leave them alone. And so we do ..!!
Vishal @ Shekhar that wondrous musical composer duo are such a joy to spend time with in their studio. Its a very relaxed atmosphere, lounging around with all the gossip of the day and reminiscing moments of our Concert Tour. And then suddenly a burst of creativity. Somebody picks up the guitar, another the keyboards and yet another the complicated computer system, that records and tunes and finds information so essential for any song recording.
That ’sleep induced’ condition approaches at a fair trot and before I succumb to it I must deliver my sincere thank you’s to all the members of the fans clubs and blog masters of the day.
It does become difficult to do this routine when you have your brand new ear phone system firmly encompassing your ears and the song being belted out is what V@S have just sent a rough scratch of, to ascertain whether  their line of approach is in the right direction or not. You’re damn right it is ! In the right direction and pumping ..
Good night … love and more ….
Amitabh Bachchan
Posted by Mahendra at 2:27 AM