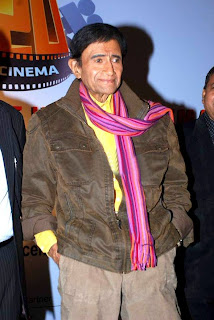 
Actors Amitabh and Abhishek Bachchan went from putting up tweets to fans about Aishwarya Rai's baby, to more somber messages. They have now tweeted about the passing of fellow actor Dev Anand. Anand passed away at age 88 on Saturday night due to cardiac arrest, shocking many.

While Aishwarya Rai baby tweets were among the recent messages by the two Bachchan male elders, they have now become saddened as they've learned of their fellow actor's passing away. Amitabh Bachchan, who goes by the handle @SrBachchan, tweeted the news just recently saying :

T 579 - An era has come to an end .. Dev Anand leaves a void never perhaps to be filled again .. his never give up belief, his joy of life !

His son, Abhishek Bachchan, was tweeting a photo about the Chelsea soccer team winning their game earlier, and showed off an image of what could be an outfit for Beti B. Abhishek has also just learned of the unfortunate news about Dev Anand as well. He tweeted :

Shocked to read of the passing of Dev Saab. Such a great man and actor. A symbol of positivity.

Just as Abhishek Bachchan and his father Amitabh were welcoming in the life of their newborn family member Beti B, they have now learned of the passing of a fellow actor. It goes to show just how precious life is, and that is beginning and ending on a daily basis. Deepest condolences are expressed to all family, friends, and fans of Dev Anand upon his passing.