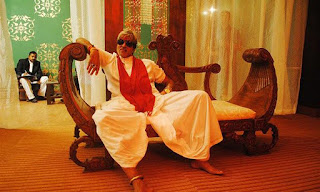 Jalsa , Mumbai         Jan 10/11 ,  2012          Wed/Thu  12 : 20 AM
What I need to do is to write the Blog before all else. Because all else is taking the preference away from what really should be of priority. When it is time to open and page my thoughts here, they are fatigued and without zest. At times my compulsion to not miss a day provokes me to put something down. Something that shall at least not be overlooked by the Ef … they are supreme and valid and committed .. they must live and survive .. my survival is unimportant compared to theirs … and so I write, even though it is time to be writing dreams ..
So … a sudden trip by the grandchildren with their Mother, who forms my child, cheers the household up. Activity around the house livens up, again and what would have been normal, now occupies a place which is excitingly normal ! The dining table is the same, but the moment of laying the food and the cuisine undergoes a revolutionary change. It is more suited to the 11 year old, who has surprised us all by making a short film on his own, on his laptop ! Story, screenplay, shooting it, editing it, putting back ground music to it, the titles and the graphics that normally go with it … all of it, by one simple soul .. and I must say it is rather good !!
More proposals later in office from recognized producers and another audio release of the very talented singer Kailash Kher brings me back home to be with family. Been doing a lot of Kher’s in the last few days .. Anupam Kher’s book release not too long ago, and now Kailash Kher’s music album … hmmm …
Shah Rukh drops by to meet the ‘little one’ , a few others too from the fraternity visit the still in wonder bundle .. and we spend all our time in trying to spend as much time as possible with her !! Simple pleasures of life ..!!
And behold … NDTV apologizes to me via a mail about the Virat Kohli incident and the misquote, and shall be carrying the correction and apology on their channel, or so they say, tomorrow .. A nice and honest gesture greatly admired, unlike some of the other 4 rth ones that adamantly refuse to. And in all fairness I have not written to them officially on the error. They picked it up from the Blog, this blog of ours, this home, this valued Ef territory … quite something is it not … shows that there are some that actually read what we communicate eh ?
Okaaay ! My yawns are beginning to hurt .. they being so large and wide that the mouth is unable to contain them any longer … ha ha  .. so one wishes you all the very best for the night and we shall meet tomorrow ..
My love as ever ..
Amitabh Bachchan
Posted by Mahendra at 1:07 AM