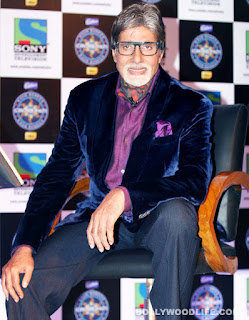 Amitabh Bachchan took to the microblogging site Twitter to denounce the buzz that he is back at work, post surgery. Amitabh had undergone abdominal surgery a few weeks back. It was initially reported that he has to take complete rest for three months. However, a few days after he was discharged from the hospital, the buzz started doing the rounds that Amitabh is back at work and shooting for the promos of Kaun Banega Crorepati? Season 6. To clarify it, he tweeted, “Media writes, I am back at work on KBC and film … not true .. I will, but not just yet .. !”

Sneha Rajani, EVP and Business Head, Sony Entertainment Television, on whose channel KBC airs also dismissed the rumours via the same site. “Yes KBC is happening this year. Was announced last year itself!Not breaking news! And NO @SrBachchan is not shooting for any promo just yet! There is still plenty of time for KBC and there is no plan just yet of any promo shoot!,” she tweeted.

Looks like Amitabh’s fans will have to wait much longer to see their favourite star back in action. We pray he has a speedy recovery.