The daughter and grand daughter are in for the evening 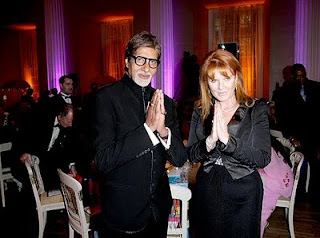 Jalsa , Mumbai   Mar  24,  2011        Thu  11 : 56 PM
The daughter and grand daughter are in for the evening ! And suddenly everything starts to rotate around them. Timings, shootings, meetings everything on the back burner. Ladies have the ability to be able to get the men of the house to do just that ! And the men, are more than willing customers. Some important writer said of the ladies the other day …. shoes, bags and compliments to them and you can never be wrong ! Maybe, maybe not. I feel though that nothing can be a more expensive gift to them, than affection and care. You may have the wealth of the world to bestow upon them, but if it not given with genuine feeling, you may as well get ‘back to school’.
Many find it difficult to understand this phenomena of women. I say … just as well. It is better that the female species remains unknown, difficult to fathom and predict. This is their birthright almost. Do not tamper with it. They defy norms at times. But I say let them be themselves. There are certain aspects attributed to them which are difficult to find elsewhere. There sense of instinct and premonition. Their quality in determining the character of a situation merely by visual assessment. Their belief in matters which have possibly been rejected by all else ; where perhaps saner elements would have predicted otherwise. Their sincerity in adaptation and of course their ability, as has been spoken of many a time, of building a home.
We do not need a ‘woman’s day’ to acknowledge this more eloquently. Every day is their day. They know it, and if we do not know it, then we should.
So … while we sit at dinner at nearby eatery, the news comes bursting through of our victory against Australia in the world cup quater final. Australia will be catching a flight home, India will have to start earnest preparation for the semi finals and Pakistan. Another historic moment in sport. How wonderfully the entire nation simply stops functioning when events like this unfold. Traffic in the city was conveniently bearable - most of the motorists were snugged in to see the match on Tv. And there was a sudden hush during the entire day as the game progressed.
And now apprehensions and nerves begin to rattle, as we step into the semi finals and play Pakistan at Mohali.
Life never stops for any situation. Wonderment and fear of today … and when it passes, the improbables for the next phase begin ; another challenge another frontier to conquer. And on and on we go. The cycle of time never ending or stopping. We look and prepare for today with great resource and will. And no sooner is it over than we begin to fret and worry about what should be coming next ! I do. The days work is over, but immediately we ask what is next. Sometimes it comes to insure us of a job the next day. Sometimes the keenness to have sufficient time to prepare. And invariably both seem to work best for all !
I am late today. And a late bed could disturb the equilibrium of our fate and destiny for the next day. So I shall beg excuse and hope that sufficient time is devoted the next day to overcome the complacency here today ..
My love for all,
Amitabh Bachchan
News bigadda
Posted by Mahendra at 3:12 AM