You, Mr Bachchan, are really a champion' 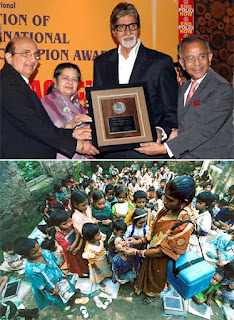 Last evening, Amitabh Bachchan was honoured with yet another award. But that was not why Prasanna D Zore came back impressed.

I want to thank you today, but not because you have played a stellar role in helping eradicate the scourge of polio from India.

It is true that the millions of parents who heeded your advice to give their infants do boond zindagi ki (two precious drops of the polio vaccine) cannot thank you enough. In recognition of your contribution, the Rotary Foundation honoured you as Polio Eradication Champion on April 19, which also happens to be the birthday of one of its founders, Paul Harris.

I am expressing my gratitude to you today for mentioning the unmentionable. Something that speaker after august speaker chose not to mention, even as they showered praise upon you for being the mascot of India's polio eradication drive.

One is not saying it was intentional.

It is quite possible they were so overwhelmed by the occasion, and by your presence, that they forgot to mention the stellar role played by thousands of unknown, unseen, unheard of individuals in the battle against polio. But then, they didn't fail to mention the generous monetary contributions made by some individuals to help fight polio.

Money does play a huge and beneficial role when it comes to fighting debilitating diseases; these donors must be commended for their generosity. But so must the army of people who take these vaccines to children in India's jungles, mountains and hostile environs.

Thank you so much, Mr Bachchan, for bringing it to the notice of the world, and to the elite gathering you addressed yesterday, that the feat of having just one polio case in the last 15 months wouldn't have been possible without the diligent effort put in by the hundreds and thousands of men and women who toil through the length and breadth of India to administer those two precious drops of life.

Thank you, Mr Bachchan, for sparing a thought for these unknown, unseen, unheard of souls.

Thank you for being the voice of the voiceless.

Thank you for giving due to those who are not as omnipresent as you are, but deserve to be equally commended.

This is how you praised their effort, all the while humbly underplaying your own contribution. Thank you so much for that.

I must say that I am least deserving of (this honour)... but I feel that it is not just one person's contribution. There have been many workers who have gone onsite to villages, to rural areas and have insisted that this campaign be followed through. So I want to applaud those workers that have gone out on the field... (Watch Amitabh Bachchan's speech ).

When Amitabh Bachchan speaks, the world listens. And records. And plays it again on again on the airwaves. The message reaches the target.

And that is why, I thank you, for not getting overwhelmed by those words of praise and sher-o-shayris (poetic eulogies) when you rose to accept the honour.

It takes a real hero to stand committed to a cause, play an important role and yet attribute it to a collective effort. Your words, when they reach these toiling health workers, will go a long way in fulfilling your wish of not seeing a polio case not just in 15 months but for ages to come.

You, Mr Bachchan, are really a champion.